Be Richest - develop your own business empire and keep residents safe and happy!

You can save the day in many different ways.

You can oppose the dark forces or solve misterious cases through the adventures full of puzzles and hidden objects.

You can also do that in a more hectic manner through building and renovating and reconstructing and planning.

Be richest! is for those who tend to choose the latter way.

There are also bonus goals that differ in their challenge level just like all of the levels in the game. Be richest! is a sequel of the two other releases from this developer - Be Rich! and Be Richer! 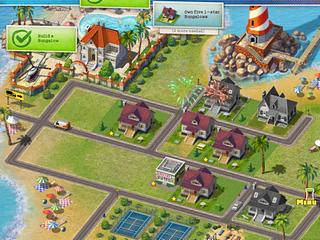 You are now called to help restore a city after all the damage that was brought on it by an official.

Your task is to restore homes and businesses, keep residents safe and happy.

By doing all this you slowly create your own business empire an become a serious rival to the evil official.

The game looks pretty good and bright. The lovely music makes encourages you to follow the pace. There have been some changes in the user interface.

Now you don't get a small window with the information about a building and then decide if you want to do anything with it. 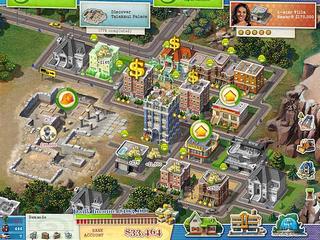 Now you can just uprade the part of the building you clicked on.

Some may appreciate this as it makes the game faster but only if you don't make mistakes in a hurry.

The commercial buildings are now up-gradable and come in 4 categories.

Each house wants to be a dream house, to do this you need to provide it with a number of amenities.

There are also bonus goals that pop up at random. They differ in their challenge level just like all of the levels in the game.

The game is well done but the new featues it adds to the previous instalments will attract some and scare off the others.

You can find out which of the two groups you belong to by playing the free trial version.