Grim Facade: The Artist and The Pretender - Casual games reviews.

Download Grim Facade: The Artist and The Pretender for Windows

ERS Game Studios has made a game based on Leonardo da Vinci!

ERS Studios is responsible for making the best-selling Puppet Show game series, and now this latest addition to the Grim Facade series is absolutely over-the-top.

Grim Facade: The Artist and The PretenderThe art in this game is better than any other casual game that I have ever seen.

At the beginning is this awesome 3D animation with a giant hand in Florence.

The setting is in Florence, so you get the cool cobblestone streets and architecture, but there is also classic artwork from da Vinci himself woven into the game as well. 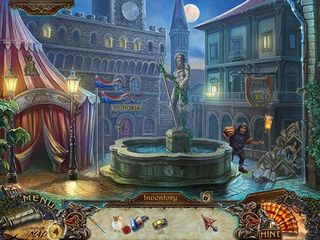 In Grim Facade: The Artist and The Pretender, a machine bird comes to you to herald a message from Leonardo da Vinci himself, that Florence has been taken over by a great mage.

This mage is capable of fantastic feats, but his goal is to destroy art and science. A small militia has gathered together in Florence, but they need your help!

It's not your typical cardboard animation, but has way more class.

In this hidden object puzzle adventure game, you play the role of a private detective hired by the greatest Renaissance man of history and get to explore the exciting and mysterious streets of Florence in a quest to protect her historical treasures.

Get the Collector's Edition now! It includes a really spiffy bonus game in which you get to help the mayor of Florence restore the city after the damage.

You get to collect coins throughout the collector's edition with which you can purchase useful things for the game. There are also achievements and you get to restore da Vinci's stories. This Collector's Edition is truly one of the best ones out there.

This game is perfect for the casual gamer who is a fan of Renaissance art and science.

Download Grim Facade: The Artist and The Pretender for Windows