Hidden Mysteries: Salem Secrets - is the hidden object game, that is packed with intrigue and mystery. When I was introduced to only a few details of the story in Hidden Mysteries: Salem Secrets, I immediately thought about Sleepy Hollow movie. If there are those who liked the movie among the players, they might find it as another attractive feature.

In the game you arrive to the Salem village and get only a short description of the situation you are in. The problem is stated as a short order to go to a certain place, find out what is actually going on there and maybe fix it. But upon arriving you find out that things are a bit more complicated. You were informed that there were four girls in the village who were behaving in a very weird way and disappeared after all. Your task is to investigate the case, but when you come to the village, the atmosphere reminds I Legend movie. There is no anyone in the streets, and the doors are "decorated" with the notes asking not to bother the owners, or telling about the fears of the village citizens. 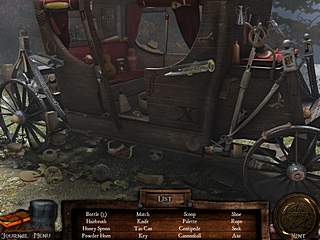 As for the tasks it's nothing new. In the HOG scenes as alwas you will need to look for the hidden all over a location items and collect them. Sometimes, completing the HOG scenes, you may collect some special items which you may use somewhat further in the game.

But I would say that searches are not very easy. Most of the time because of the colors that the game uses. It is clear that grey and brown colors create the gloomy atmosphere, that the game is required, but, as for me, it is not fun to do the searches in those rooms, where there is nothing to please the eyes. The seek-and-find levels provide hints on a rechargable basis if you stuck. And some of the items will go the inventory to be used somewhere else in the game.

The building you have access to are mostly empty and abandoned. As you wander from one building to another you come across areas for some hidden object searches. What else you come across are the locks, locked doors, and other things that involve some interaction on your part. 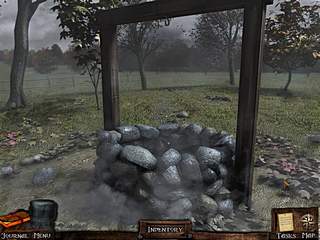 I think the interactive parts of the game are not strictly devided into separate levels, but rather you can go everywhere you want. In those places you run into the challenges to solve. This means you need to keep in mind everything you come across, because otherwise you won't have any idea how and where use the inventry items you find. In this way the game requires your total attention if you want to proceed.

Ah, and I would say I found the Map and the journal with tasks helpful. Because it really helps you to learn where are you right now and what tasks you have to do.

As for the whole atmosphere in the game, I'd like to tell that it is a bit gloomy as for me. In the most cases, scenes are presented in dark colours. But at the same time the graphics from other scenes are very bright and good-looking.

Anyway, Hidden Mysteries: Salem Secrets is good for the interactive levels fans allowing them to show the best of their skills.