Play an addictive game The Mystery of the Mary Celeste!

Download The Mystery of the Mary Celeste for Windows.

The Mystery of the Mary Celeste is one of the latest releases to the hidden object games genre. The game was developed by Media Art and published by Merscom to invite you into the story of a mysterious Mary Celeste ship.

You play as an ancestor of the person who found the ship weird as she was.

The original story of the ship says that the ship was found without her crew but absolutely undamaged at the same time. 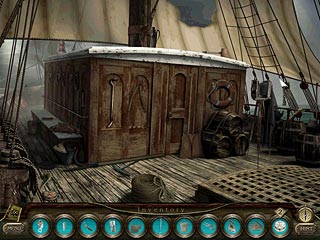 The answer to the question: so what happened? is still not found. The main character of the game is Mary Morehouse takes a voyage on Mary Celeste II.

This second ship follows the story of her ancestor. Spooky things begin to happen and Mary wants to know what's going on.

To do that she goes to different places on the ship to search for the items requitred. Not only Mary investigates the second ship but she also time travels to the first original ship.

Since you are on either of the ships all the time, the number of places to go is limited and you visit some of them over and over and over again. That's a bit disappointing. 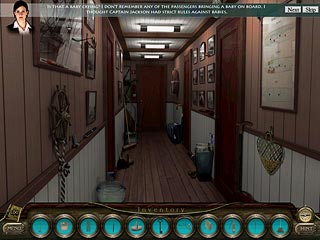 The items to find are given on the form of small images with no discription which makes it a bit difficult to find them sometimes.

But good for you randon clicking is not punished. Plus there are hints to use.

The mini-games are rather average and not difficult to complete. The graphics are really gorgeous and the sounds are not bad. Both render the mysterious atmosphere perfectly.

Get a trial version to see if the game os what you want and wether the bad or good parts outweight.

Download The Mystery of the Mary Celeste for Windows.