Imagine what will earth look like if there will no people... The developers of Mysterious Travel: The Magic Diary tried to implement their point of view in the game. And look what we have now!

She was bored, sitting alone at a cafe and reading a newspaper... when suddenly she found an announcement from a travel agency. All that was needed to do is to send a message - and win a trip. So did she. An airplane took her to the beautiful place. But when being at the hotel room she found out a diary, which told her that she is the only person in the entire world. Lately, she learned that if she wanted to return she needed to collect the numbers. But she was limited in time. As everything should be arranged till midnight. If it is not, she will stay in that strange place forever. Where are the people?! Is it a trap or just a joke?! You are to help Julia to find her way back home... 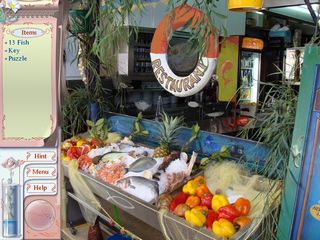 Mysterious Travel: The Magic Diary is a standard hidden object game, full of mini games. It can hardly be called an adventure, though there are some tasks similar to quests. You can't switch between the locations, you have the only scene to explore and find the hidden items. But at every location there is a mini game. They are as follows: find the differences between two pictures, complete a picture, find all the words from a phrase, remember the sequence of symbols and then repeat it and so on.

Sure there are hints. You can take one whenever you need, but then you should wait until it is recharged. At some locations there are hints hidden in different place. Thus you should be attentive in order to find them! 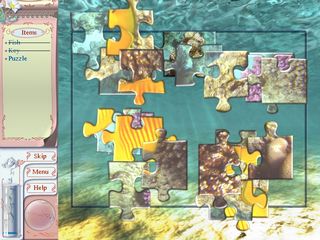 The game story means that there will be no characters besides you in the game world. Instead of people you will meet their hats and glasses moving - and so on. Personally I didn't like this. As this feature made me feel being alone and lack people's presence. The same can be said about music: it is a little bit dull and depressive.

Sure it depends upon person's taste. But in my opinion it would be better to add some adventure part to the game as it seems to be monotonous. But maybe if you want to play a standart hidden object game, it would gladden you.