Natalie Brooks: Mystery at Hillcrest High, from Alawar Games, is the latest full-featured Natalie Brooks hidden object adventure game, which has you helping Natalie to foil the Black Cat Gang as they attempt to pull off the heist of the century. In fact, gameplay is much more adventure game styled than in previous games of the series. You spend so much time trying to solve inventory and item manipulation puzzles that it takes a suddenly appearing hidden object scene to remind you that yes, technically, this is a hidden object game. 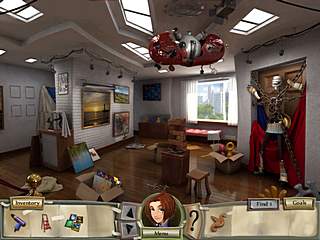 Each of the game's ten chapters takes place in a location made up of a handful of rooms. Mousing over the background reveals tooltips describing objects, exits, other characters, etc. The mouse pointer may change to a magnifying glass to indicate that an object can be examined further, a set of gears to announce that an object can be handled physically, or a doorway to point out an exit Natalie can access. Clicking on useful objects adds them to Natalie's inventory.

Everything is completely interactive, so you can multitask and really get into the environments. The graphics are about average, but good enough to enjoy. It's a bit challenging (especially since Natalie Brooks: Mystery at Hillcrest Highthe in-game hints can be vague), so you might want to have a walkthrough handy when you play. In particular, there are a few puzzles (like a clock Zodiac puzzle) which require a bit of outside research, but nothing too heavy. These are all skippable after a few seconds of effort, if you're not in the mood. 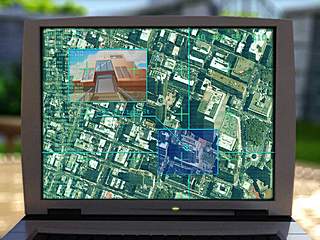 To solve most puzzles, click on an object from your inventory and then where onscreen you'd like to use it. Thus you can unlock doors with keys, pop balloons with darts, remove bolts with wrenches, and all the other staples of adventure gaming. Natalie is indefatigable in her zeal to repair every gadget she comes across in her Natalie Brooks: Mystery at Hillcrest Highinvestigations, somehow knowing that toy helicopters and broken piggybank clocks will be useful in her nearest future. At the bottom right of the screen are Natalie's goals, so you usually know what you're supposed to be trying to accomplish. Hint: when in doubt, click on everything.

Hidden object scenes pop up occasionally and are fairly standard for the genre. In a cluttered room (or hilariously stuffed-full purse) you'll be asked to find ten objects, one or more which will be added to your inventory for later use. 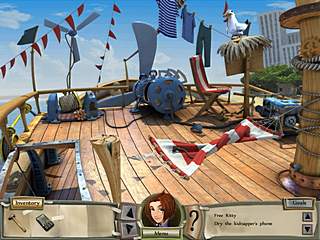 It's Natalie Brooks: Mystery at Hillcrest Highimportant to mention that there is no penalty for random clicking! Hints are quite plentiful if you can't find an object, and the hint button recharges decidedly quickly.

Natalie's friends and enemies are portrayed onscreen as 3D characters that shuttlecock within the current background. The story takes place in conversations between characters, Natalie's journal entries, her own asides, and some well put together animated cutscenes. There are no voiceovers in Mystery at Hillcrest High, but the game hardly lacks from their absence. The best part is that it's nice and long, so you get good gaming hours out of it.