Download Righteous Kill 2: Revenge of the Poet Killer for Windows.

The hidden object game Righteous Kill 2: Revenge of the Poet Killer from Merscom/Starz Entertainment and Media Art continues the story of Erica, an NYPD Detective who belongs to the specialized Vigilante Unit. This time, she's on the trail of the Poet Killer, a madman who enjoys leaving tantalizing notes behind at the scenes of his crimes.

Righteous Kill 2 has very little to do with the film of the same name starring Robert De Niro and Al Pacino.

You'll search for clues by visiting various locations, such as a warehouse, office, and Chinatown, and finding the list of objects in each. Most scenes have hotspots that you can click on to zoom in on part of the scene, and occasionally you'll find key items that can be added to your inventory and used in a scene (such as using a cotton swab to take a blood sample).

There's no timer, and hints are unlimited with a short recharge time in between uses. In between hidden object searches you'll have to do things like dust for fingerprints, re-assemble torn documents, and compare bullets in the ballistics lab. 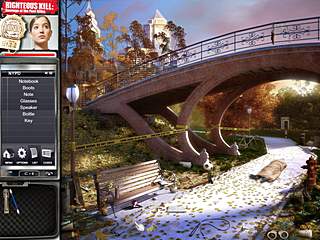 There's also a unique four-way spot-the-difference challenge where you have to compare footage from four different security cameras. This was one of my favorite of the game's activities.

With 11 chapters each divided into several scenes to investigate, Righteous Kill 2 is a much longer game than its predecessor, which was criticized for being on the short side. Righteous Kill 2 definitely isn't short (expect at least four or five hours of gameplay), but a couple of hours in and the game starts to feel padded and repetitive. 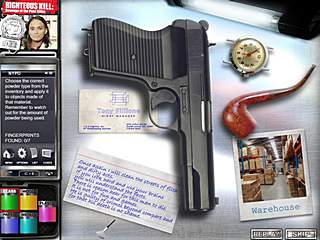 In the latter half of the game you'll find yourself retreading the same scenes over and over again, searching for a seemingly endless array of guns, folders, pens and drugs. I found myself losing faith in Erica and her team as they wandered around the city picking up stereos, scissors and flags while the body count kept growing

Righteous Kill 2: Revenge of the Poet Killer is better than the first game, but still feels mediocre compared to what else is on the market.

Download Righteous Kill 2: Revenge of the Poet Killer for Windows.