What will you do if your childhood friend claims to be an emperor while being arrested? A newly released hidden object puzzle adventure game called Shaolin Mystery: Tale of the Jade Dragon Staff gives you a great opportunity to act!

Playing as a young woman named Yu (quite a symbolic name, isn't it?) you are supposed to travel across China. And be sure the skillfully drawn fabulous landscapes and oriental music will make you forget that it's only a virtual adventure but not a real trip to East. The gameplot is rather catching as you're not only looking for a mysterious jade staff but also belong to a rebellious clan. While fulfilling different tasks that are kindly reminded you permanently on the screen in the right corner below you meet various characters starting with common people and ending with dragons and spirits.

The game mostly consists of the hidden object levels where you are to find the items due to the list. Some of them are hidden so well, that even an experienced player cannot guess that it is needed to open the cupboard first in one of the episodes. And sometimes you are puzzled by the name of the object you have to find. Do you know, for example, what the calabash looks like exactly? Yep, sometimes you'll look for something absolutely strange. But the hint button recharges really quickly so don't be afraid to get stuck. Quite the same is with the mini-games that you find between the hidden object levels. Though they are rather challenging it is still possible to solve them thanks to the clear instructions.

Different levels are the chapters of the adventurous saga. Each saga is a big multitask mission. Passing the levels will bring you to various locations. Sometimes the script makes you come back to the place you've already visited, but the attentive to the details player will notice for sure that these places changes a little: some new objects may appear, the others disappear or change the places. So even if the place is already known it may look in a different way. 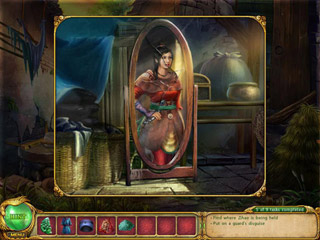 Wondering back and forth don't be afraid to get mixed up with the questions what you're supposed to do next. If you enter a location and press a hint button, the prompt will immediately appear above the inventory panel. Sometimes the tip is shown as a sparkling circle that points on the character you're to address or the object you should work with.

The graphics of the game is notable for the pastel shades, smoothness and details. And the calm music perfectly suits the idyllic pictures. The only question that still bothers me is why the storyline between the chapters can be read and also heard (it is the first-person narrative) but when Yu speaks to someone the dialogues can be only read.

To make a conclusion it will be fair to note that one of the main merits of Shaolin Mystery: Tale of the Jade Dragon Staff is its truly oriental scent. Though the exotic countries are really popular nowadays among the tourists it is still impossible to experience their ancient prototypes. So everyone who's not aware of the traditions, myth and way of life of the ancient China has a chance to know all that.

Besides the people who are tired of male heroes and believe that girls can also save the world will get some extra pleasure. Yu hardly looks worse than Lara Croft and for justice' sake I can admit that it is hard to recognize her as a Chinese girl but not European one if not her costumes.