Tamara the 13th - save your mother!

The game plot of the PlayFirst's new game Tamara the 13th is based on the stories of witches, villains, magic portals and adventures, of course. A girl, called Tamara McNamara turns out to be a 13th-generation of witch and her family has been hunted by Mad Maggie – the evil that managed to take the heroin's Mom through a portal. So you have nothing to do, but to follow her and try your best to rescue your mother.

Tamara along with her Cat first enters the land of the Green Man, who's been disabled by Mad Maggie of course. So your first mission will be to free the Green Man and your first place to visit will be the Earth realm. And by means of completing different tasks, solving the puzzles and finding the objects in the numerous hidden object scenes you'll open yet another portal. 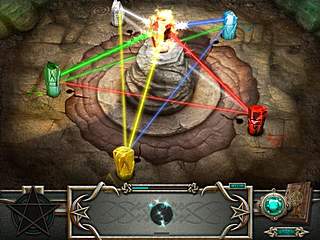 The game consists of 7 chapters, so it will take you about 2 hours to wander all the locations. The next place to visit is the Air realm. Get prepared for a surprising twist in the story: the Cat that you've been already used to suddenly transforms into a man! Through the dialogue you'll get to know that he's been a McNamara familiar for 100 years, though the guy looks as if he is 30. But everything in the story is about magic and mystics, so it's not the time to be surprised by the appearance of the people. To tell the truth personally I sometimes regret that it is impossible to look like 20 in your 40, so if I were a game developer I'd rather make the Cat transform into a woman rather than a man just because the problem of looks doesn't really bother the men. So that way the game could be a little more realistic than it is. 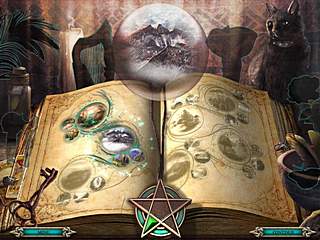 As you've might have guessed all the realms you visit is ruled by a different elemental - water, fire, air etc. As soon as you free the governor of each realm you’ll gain the corresponding magical powers. These powers can be used to reanimate trees, fill pools of water, remove fog, and for many other good things, in order to complete your journey.

The game is a traditional combo of the puzzle and the hidden object game. And as for me, the puzzles are the best part of the game. These consist of “Simon Says” puzzles, and a multitude of tile-rotation puzzles that are challenging in contrast to the HOG-scenes that are rather frustrating. The main peculiarities of the HOG-scenes is that the objects are really hard to distinguish. And even the Hint button rarely helps. 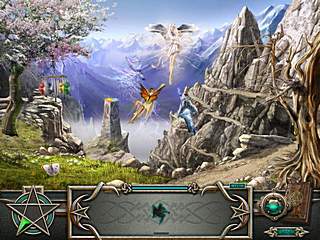 So sometimes the random clicking will be the only way out – don't be ashamed to do that. You'll not be provided with the lists of objects to find. Rather, you’ll be expected to search for one or two items at a time, and many of them will be broken into pieces. As there is no item list, the object that is needed is shown as a silhouette at the bottom of your screen, so that it is absolutely unclear as for the item’s color, material makeup (stone, fabric, wood, etc.). For this reason and because of the unclear silhouette some hidden objects might become a real torture.

As for the artwork it is neither good nor bad, but if the characters could move more naturally, it would definitely bring some positive reviews to the game. Besides the game really lacks some voice acting.

In general Tamara the 13th is a nice variant of the well-known type of the game. Some may like it, the others can criticize, but only you is to decide!