In 1987, Maxis cranked out its first hit SimCity game.

Perhaps their greatest hits have involved allowing the players to control The Sims, that is, the actual citizens of these SimCities. As technology has developed, so has Maxis.

The Sims FreePlay is more immature than some of its predecessors. Two players can have sex in the game (though, they call it вЂњwoohooвЂќ and they don't make it as graphic as they could).

There's also the option for players to fight one another. Consumerism is a reoccurring theme, but the actual pricing strategy of the game isn't too bad. 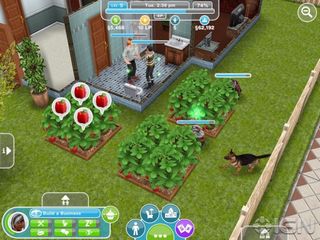 It's possible to have lots of fun without paying a single real dime.

There's no bad language or drug use, so this game is certainly more wholesome than many others that are out there today, but the вЂњwoohooвЂќ element is still an unfortunate addition to this game.

The Simsв„ў FreePlayThe game is engaging. Much like Farmville-type games (they themselves evolved from Maxis' Sim games), you have Sims to whom you can give tasks that will take certain amounts of time.

For example, feeding a Sim takes 20 seconds and having him go to sleep will take 7 hours.

You get to play with many different Sims, though, so you don't have to stare blankly as your Sim catches some Zs. 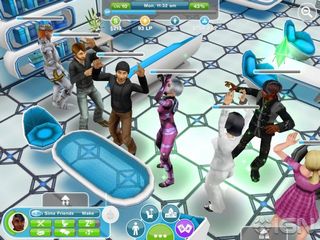 Something that really stands out about this game is how time is measured. Usually, games will be set up to be faster than in life, for example, one second could equal one minute. Not in this game! Here, one second equals one second.

There's some real cutting-edge stuff going on here, and it will be exciting to see how this game changes the way we think about gaming in general.

If you can get over the vulgarities, then this game is worth the download!