Download Youda Legend: The Curse of Amsterdam Diamond for Windows.

This will really become a strange adventure... This will really leave traces of astonishment... The sole question is: are you ready to get to know the essence of the matter? If you are brave enough, you will open the foreign world of Amsterdam with all its peculiarities and eccentricities. Fasten your seat belts as we are setting out!

Youda Legend: The Curse of Amsterdam Diamond is a hidden objects game, classic in its style, but debut in the style of Youda Games. As there were no seak and find Youda games before. They say you must spoil before you spin, but I dare to say that the game turned out to be perfect as for its so called В«opening nightВ». Though it has both advantages and disadvantages. The main plus is that it involves you into intrigue just from the first moments you start playing. 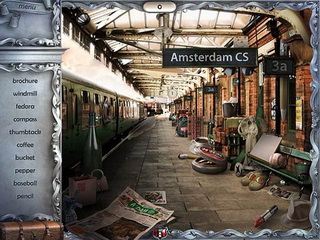 It starts when you arrive to Amsterdam, the capital and largest city of the Netherlands. The first thing one think about is where to find the information about the nearest hotels or something like this. In order to get answer to the question, you will have to find all the items listed on the left part of the screen. And here is a thing I liked most of all: the scene is not so dirty with different items as in other games. Thus it is much easier to find an object needed. By the way some of them get into your inventory truck so that to be used later. Among such items are pieces of some kind of paper. Later you will find out that these scraps are pieces of a map. But it will be later, and now let's turn back to the plot.

So, after you will complete a level where you are to find all the items, you will find a special object that will point you on what to do next. Thus, you have found a map, where a new location is pointed. It may be theatre or a bridge or any other location in search of more hidden items. By the way it is the whole pleasure to travel through Amsterdam. As the game is full of bright and very beautiful pictures. In order you would not become bored, the developers of the game turned on their creativity and decided to dilute the ordinary levels with unordinary mini games. Thus there is a mini game after each level. And what is more surprising is that there is no similar games. This makes you impatiently wait for another mini game. The only disadvantage is that there is no opportunity to skip a level. And when a game is a bit difficult, you should waste more time and effort. But it is unconvenient only for those who like easy ways, the true gamers will only like the feature. 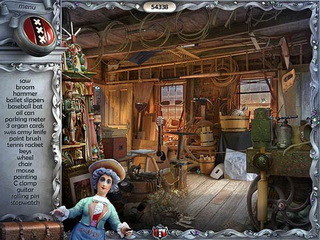 Among the mini games are such tasks as opening the door with three keys, moving amulets around a map to learn of your next destination, to name a few.

The game has one more great thing: a language shift. It means that you can choose between seven languages: Dutch, French, German, Italian, Spanish, British English or US English. This means that if you want to improve a language, you should not pay additional money for a game in different language, but just switch it.

As you can see, there are both negative and positive sides of the game. But its my opinion. But you can like a feature that I don't. In order to have your own impression from the game, you should play it. And maybe you will even recommend the game to your friends.

Download Youda Legend: The Curse of Amsterdam Diamond for Windows.