Congratulations! Your favourite book by Daniel Defoe inspired the game developers to creation the new hidden object game Adventures of Robinson Crusoe! This game will not allow you to stay aside and just observe. The cute graphics and remarkable story will make you live Robinson's fate and feelings as your own. In other words, if you want something engaging, then this game is for you!

The plot of the game should be familiar to you. But let's recollect it. The events take place in 1650-s. The story tells about a man, who was fond of travelling and had already visited a lot of countries. He felt himself a part of the sea and thought there was nothing that could shatter his peace and quiet in the sea. But he understood that it was a bad turn of his fate when he found himself alone on a deserted island after his ship was wrecked and his crew died. Never was he so desperate and glad at the same time. Desperate because he did not know what to do and glad because he survived. Could you imagine how strong a person should be so that not to give up in such a situation and grow up a hope in the heart?! Robinson was really a strong person. So what were his actions? How he prepared food and made shelter? Were there any other people on the island or he was really alone there? The answers on these questions you will find while playing the game. I can only add that you will be surprised! 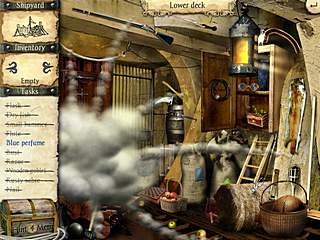 The game consists of 6 chapters, each of which includes 6 stages. It would be interesting to mention that this hidden object game is not like other seek and find games. In ordinary hidden object you are given a list of items needed to find from level to level. And if there are a lot of levels, one can be bored from monotony till the end of the game.

Adventures of Robinson Crusoe will not alow you to have a tedious time. As there are various hidden object tasks. For example, in one stage you are to find a certain amount of items listed. ;In the second you are to collect the similar itmes such as weapons or diamonds. Another level will puzzle you with a mini-game such as finding the captain's compass which is hidden behind the small door. To open the door you should figure out which of the figurines given to put on the buttons below. On another stage you are wanted to find the differences between to pictures and so on. As far as you could understand this game is indeed not an ordinary one. By the way there is more unique feature. Some of the items listed are colored in blue. This means that you should fullfill some additional steps before they can be collected. For example you should find a stamp. But it is locked in a chest. So, first of all you should find a key and unlock the chest. Only after these extra actions you can take a stamp. 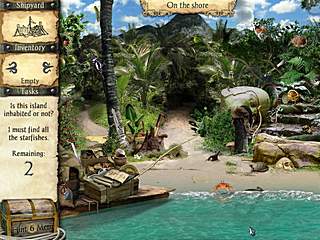 The are also 2 modes in the game: relaxed and survivor. If you want a quiet, calm game with more hints and no timer at all, you can choose a relaxed mode. But if you consider that Robinson's fate is your fate and you want to be given a timer and fewer hints, you may choose a survivor mode.

The game seems to be so real that everything: plot, music and graphics will transform you from your seat near the computer into the deserted island. And you will become a Robinson and write your story full of adventures, loneliness and hope. You will live his life, experience his despair and joy... Though the game is too short as for such an iteresting game, but you will even advance in building a ship!