That's it. Halloween is near and it's time for scary stories to be told. But the thing is that GameHouse doesn't want just to tell the story it wants you to experience it yourself. That's what Campfire Legends: Hookman is all about.

The stories told around the fire are fun as long as they don't becaome a reality for you.

You start the game by joining the girls who tell all kinds of horror stories around the fire. The story of a hookman is brought to life again to scare you with this man with a hook for a hand. 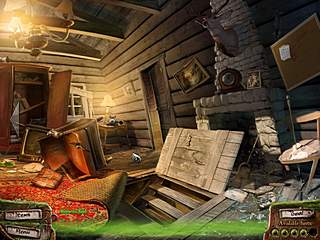 You'll follow the story's characters: Christine and her boyfriend Patrick, as their romantic weekend at a woodland cabin soon turns into a haunting and disturbing night alone with the unknown.

Campfire Legends is a thrilling hidden object adventure with some unique twists. Where some games in the genre have separate point-and-click sections coupled with scenes specifically designed for finding hidden objects, this particular game does a beautiful job of meshing the two. Hidden objects aren't always hidden in a single screen or area, but sometimes rather spread out over a few areas. The beauty of this is that every single hidden object has a purpose, and the location of each makes sense.

There is more to game play than simply finding hidden objects to solve puzzles; there's also a variety of actual mini-game style puzzles to boot. 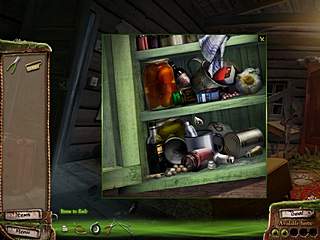 Puzzles range from reassembling torn paper and broken mirrors to solving complex lock and safe systems, each with their own twist. The majority of puzzles aren't particularly easy, either, nor can they be skipped. They're challenging and will require you to think out of the box.

Yet what's a campfire story without the horror? Don't worry, Campfire Legends definitely delivers. It's not just about a creepy environment: music, presense, fleeting shadows, surprise in-your-face encounters, and just plain suspense are all capitalized. The game serves as a tasty appetizer before Haloween.