Have you ever heard an English Christmas carol that enumerates a series of increasingly grand gifts given on each of the twelve days of Christmas called "The Twelve Days of Christmas"? First published in England in 1780, it is still widely popular. For example, last year the iPhone 3G sang the song with modified lyrics in the TV commercials and this year in The Simpsons episode "The Fight Before Christmas", where a "Muppet"-like Simpson family with Katy Perry sang their version of the song, "39 days of Christmas Days". Actually Christmas Wonderland is based on the lyrics of the carol. Playing the game you'll have to collect all the presents given by the true love during all the days of Christmas. And if you don't remember the list, don't be sad — the game starts with this wonderful song.

The introduction part of the Christmas Wonderland might be skipped, but personally I enjoyed listening to the carol, telling that "On the twelfth day of Christmas, my true love gave to me 12 Drummers Drumming, 11 Pipers Piping, 10 Lords-a-Leaping, 9 Ladies Dancing, 8 Maids-a-Milking, 7 Swans-a-Swimming, 6 Geese-a-Laying, 5 Gold Rings, 4 Colly Birds, 3 French Hens, 2 Turtle Doves and a Partridge in a Pear Tree". By the way all the music in Christmas Wonderland is really nice as it's full of the holiday spirit. After the carol ends Santa appears to tell you that all the gifts were scattered all over Wonderland. He wants you to find not only the items due to the carol's list, but also some other toys and animals in order to bring them to the kids in time. Have you ever wondered how Santa prepares for the Christmas? It's your time to get to know! 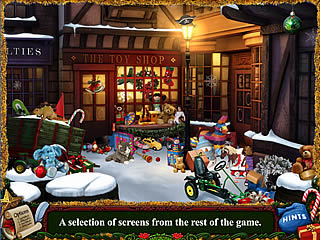 Your adventure begins at the Santa's office. Actually the game is not of the adventurous kind. It's more of hidden object scenes and different puzzles. You'll have to spot the differences, insert the candy canes into the locks in the correct order, match the two of a kind and much more. At the same time the game is rather static — there is no interactions or walking back and forth and looking for something to be added to your inventory.

Leaded by Santa Claus you'll visit different locations such as workshop, toy store, roof of the houses and finally the rooms of the kids, where the presents are awaited. You'll have to help the Santa's team making the presents, loading the sleigh and much more. And all you need to succeed is to be attentive and careful finding the objects! Sometimes you'll have to be pretty smart in order to understand that when you're asked for American Football you have to find the ball used in this game. 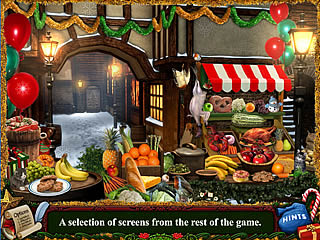 Though the puzzles are not at all brand new, I wasn't annoyed with them, as everything in the game is about the Christmas. Don't get me wrong, but if the game had any other theme, I'd probably grumble that its developers failed to make an interesting game. But the fact is that the developers made the great job creating a real atmosphere of the holiday by means of good artwork and nice music. And sometimes it can work out! Christmas Wonderland is right the case.

Hardly progressing through Christmas Wonderland will be hard for you. But if you get stuck be sure that the hint button recharges fast. It looks like the big Santa's sack and when it is all blue you can click it. Besides the items mentioned in the carol will be sparkling, if they are in the location, so that your eyes will catch them easily. All the puzzles are shippable. And personally I skipped some of them not because of their complexity but mainly because of their humdrum. On the other hand, tastes differ. So maybe you'll like the puzzles.

Making long story short, Christmas Wonderland is not really challenging especially for the experienced HOG-players. But if you still lack some Christmas mood, that's right what you need!