Tired of similar hidden objects games and want something special? Something, that goes out of just walking and looking for different items? Then The Clockwork Man is exactly the game you have been searching for so long. The game has a lot of really unique features that haven't been experienced before. Just think of ability to zoom or explore the scenes from the different corners of view. Isn't it a good idea?

The story of The Clockwork Man takes place in London, in the year of 1889. At this particular time the main character Miranda Calomy receives a letter from her grandfather, who is a famous engineer. The last asks his grandchild for help as he got into trouble. And the young follower of grandfather, student of an Engineer Academy, starts her journey full of unexpectedness and intrigue. 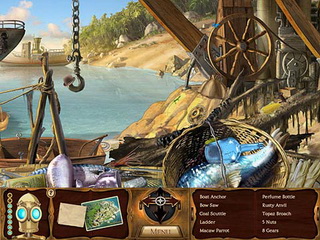 According to the story plot, the grandfather is not the only relative to Miranda. She has also a very good friend. He is not a human being, but a robot whose name is Sprocket. You will for sure also become friends with Sprocket, as he will always give you a helping hand. The matter is that he has 4 gadgets and thus can give you 4 types of hints. At first you can use only one of all. But gradually you will be able to unlock three more. Sprocket needs energy for operation. Each kind of hint costs a definite amount of energy. For example, basic object locator gadget costs 2 energies, while object datable gadget (which shows the visual representation of an object) costs 1 energy. That's why you shouldn't forget to recharge robot. The thing I didn't like in Sprocket is that he demands too much time for recharging as for me.

The most inimitable feature is that the game is designed in panaroma style. It means that there are two unique options in the game. The first is zoom. The name speaks for itself. It means that if you need you can zoom a scene to a closer position, look for the objects and then back out. The second is scrolling. It means that you can scroll the scenes to the left or right. Such the features will make you feel being there at that particular scene. 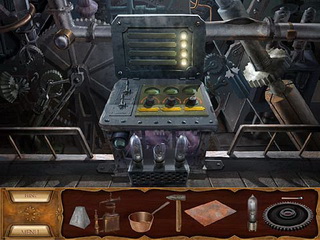 The game is followed by relaxing music. Especially I liked the one that is at the beginning of the game. It produces an impression that it is not the game you are going to play, but the film or a fairy tale you're going to watch. Really fascinating. As for graphics, I can say that the developers made a good work. There are also good mini games. They don't look like copies borrowed from different games because they are connected mainly with engineering. For example, in one of the levels you will have to repair an airship engine and so on.

The Clockwork Man singles out of the hidden objects games. Playing it, you will see that the developers did their utmost. And all this for your pleasure. You will for sure respect the game. Don't hesitate and start playing.