How appropriate that вЂњThe Mystery of Marie RogetвЂќ should come as a sequel to вЂњThe Murders in the Rue Morgue,вЂќ as that is how Poe intended!

Dark Tales: Edgar Allan Poe's The Mystery of Marie Roget Collector's Edition is an absolutely delightfully creepy follow up to the previous six episodes of the Dark Tales series.

There are few persons, even among the calmest thinkers, who have not occasionally been startled into a vague yet thrilling half-credence in the supernatural, by coincidences of so seemingly marvellous a character that, as mere coincidences, the intellect has been unable to receive them.

Such sentimentsвЂ”for the half-credences of which I speak have never the full force of thoughtвЂ”such sentiments are seldom thoroughly stifled unless by reference to the doctrine of chance, or, as it is technically termed, the Calculus of Probabilities. 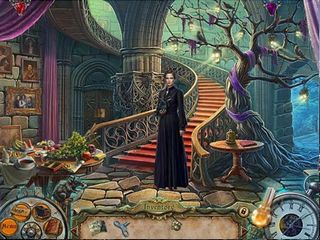 Now this Calculus is, in its essence, purely mathematical; and thus we have the anomaly of the most rigidly exact in science applied to the shadow and spirituality of the most intangible in speculation.вЂќ -Edgar Allen Poe's opening lines of вЂњThe Mystery of Marie Roget.вЂќ

If you are a fan of Edgar Allen Poe and Hidden Object Puzzle Adventure games, then you're in for one thrill of a ride!

If you haven't played the previous games, then I recommend starting at the beginning.

Before you play, read the actual Edgar Allen Poe stories, and you'll catch all the inside references to this great American literary hero.

The ghastly collector's edition includes a Strategy Guide to help you along while you play, and downloadable media (art, wallpapers, screensavers, music, etc.) to give you the shivers even after you're done playing. Earn Achievements and replay mini-games and HOPs.

As a sweet bonus, you'll get to play a bonus chapter where you take on evil for good. Excellent game for fans of Edgar Allen Poe!