If a well-known chemist Mendeleev did not believe in his night dream with numbers and elements and told "Thanks God, it was just a nightmare!", who knows how long people would compile a periodic table! The same is with the main heroine of a puzzle game Dream Sleuth. It was her night dream, that told her about a little girl that went missing and nobody could find her.

The story is highly connected with the game and its tasks. It begins when the girl named Catherine arrives at her Grandma's house. First of all she finds out that a little girl from her city was kidnapped. As the main heroine is very tired from a trip, she falls asleep. And from this actually the game begins. 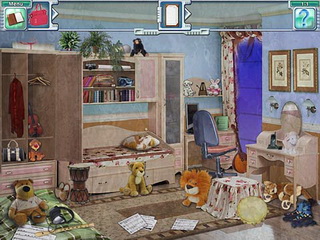 In her dreams she sees a very scared girl. This girl doesn't tell anything, she only stares at Catherine with frightened eyes. Catherine decides to find out who this girl is and thus she occures in a house and investigates different rooms. So, the first task is to find something that could have the girl's name on. Catherine copes with the task and finds a piano. Than there is a second task and she has to learn the girl's name by playing the notes indicated by the coloured fish. After it is done, a name appeares on a piano. It is Lisa Fremont. After all the goal is reached, Catherine wakes up. Than she goes to her Grandma, who will help Catherine in further investigation and starts to examine new locations.

As you can see the game is devided into parts. They are determined by the time Catherine falls asleep. And every time she has to cope with a block of tasks. It may contain different amount of them. But as usual, there are not many of them. For example, there are 3 tasks in the first part and 4 in the second one. 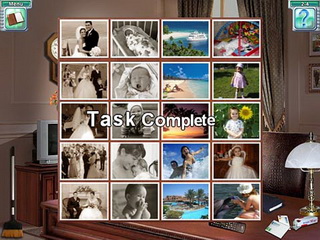 The tasks are not complicated. For example, you will need to find an object (such as Grandma's business card organizer) or collect some items (photos scattered around the room) or match the same pictures. By the way, there are some objects which can be manipulated. I mean that you can move them in order to take a look whether there is another item behind it. The game in general is not only a HOG. There are a variety of puzzles. It seems that no more games contain such differenty of mini games, which you will for sure enjoy.

One of the most impressive things is that the charakters are not drawn as in cartoons, but they are represented as the real people. It makes a good effect, when pictures of the real people are combined with a good voicing. The music also will gladen your ear. As it is calm, soft and pleasant.

Dream Sleuth is an unbelievable adventure with the help of mind. Don't neglect such an opportunity as you will not be disappointed!