The fans of the adventure games full of variety of tasks and goals will be glad to play Eternity. Because this is the game that will impress you with diversity, interesting plot and intrigue.

The game starts from sending a letter by Professor Hats to his cousin. In this letter he asks him to come and help with a time machine which he has just built. He wanted to test it, but suddenly after you have pressed the lever, he disappears and sticks somewhere in time. Thus you have nothing to do besides to try travelling through time and looking for this cute inventor.

One needs only a few minutes in order to assess the quality of the game. It is enough to take a look at the first picture with an old Professor and his time machine in order to tell that Eternity game is really cool. 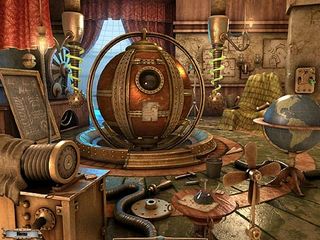 But when you start playing further and travel to the different locations, you will understand that this game is somewhat better then just cool: the graphics are polished, the hint system is excellent and the storyline is involving.

The structure of the game is divided into chapters. Every chapter is another epoch between which you are moving and every time you meet a new historic character. Thus, you will be able to get acquainted with a caveman, king of Egypt, viking, Columbus, Robin Hood and more. Every charakter will ask you for help. And when everything he demanded is done, you can move to another time period. 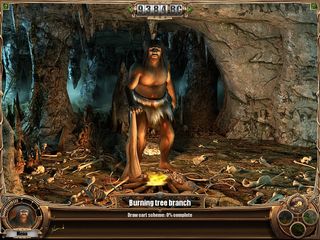 They are not difficult, but not so perfect in comparison with the whole game. They are as follows: remove pairs of tiles like in Mahjong, find parts of an object which are thrown all over the other locations, match three and other. There are also hidden object parts. But they will not make you bored as there is only one per a level.

The game has one disadvantage. The levels are very short and thus you are switching in time very quickly. But maybe the game would not be so good if it was prolonged.

One more great thing in the game is that there are two modes "easy" and "classic". And you can switch between them any time. Also there is a 3D mode, which you can turn on and off from the main menu.

To summarize, I would like to tell that it would be a pleasure for you to play this game.