The much desired release of Absolutist has finally come out! Green Moon is calling for you to complete an amazing but fine mission and make the eternal dream of humanity come true.

Green Moon was supposed to remind the players what a classic quest game tastes like, giving them the chance to exercise their brains. Saying without exaggeration, the developers really managed to make a go of it. If an original quest presupposes wandering around a decent number of locations trying to find or obtain a certain item, here you go! 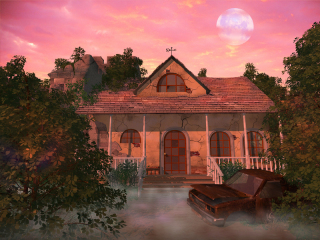 The breath-taking adventures usually start from the little, this time вЂ“ from an inheritance certificate. Lucky you are, before going to a better world your poor old uncle Louis signed you away his even older house. So, please, receive the photo, take the keys, look round and get settled. But shabby and plain as it is, the mansion still conceals a fabulous mystery. Penetrating into its secret premises you face a magic book which is going to reveal you unbelievable knowledge and provide a good few hours of unforgettable pastime. The gameplay is designed to provide the player a certain freedom concerning completing the missions вЂ“ no deadlines, no strict sequence of actions, visiting locations and using the items. Some players may consider it a disadvantage but the others would surely appreciate the wideness of possibilities. Almost any other goal can be reached by a number of ways. Though, to be frank, the idea that everything you happen to stumble upon must be used somewhere may haunt a player just for want of habit. 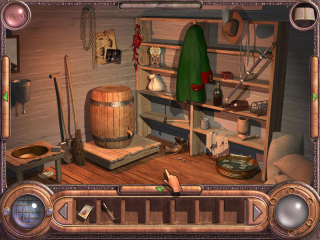 As it's not a hidden object quest, no hint button is provided. Instead a number of notes and drawings are scattered around to give you a prompt in the case you dead-lock. The authors also seem to apply all the efforts to confuse the players. Thus, call for your wit in order to guess what was meant to find or to do. Magnet generation is a bright example. Was it a joke to touch the uninsulated wire with your bare hands? No fatal outcomes? By the way, the game offers a wide range of opportunities to pass away, moreover providing a taunt for each case. To my mind, it was a bit too tough on the part of the developers, which on the other hand may be considered a special thrill. Anyway, do mind your every step and think twice before applying unidentified objects. As for the functionality, the moon navigator may require some time to get accustomed to, and the inventory panel may seem a bit insufficient. The chief recommendation is not to start grabbing everything that happens along, then 14 cells would appear more than enough. It is also possible to take the items out in most locations but be sure not to forget where you have dropped them. 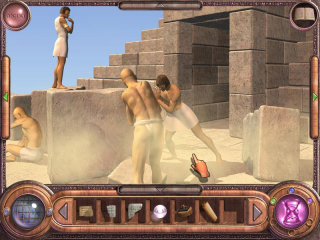 Nevertheless, even regarding all the faults and gaps Green Moon is deemed to become a hit. Its fresh idea, its numerous locations with startling art and animation is sure to provide a durable impact even on the most sophisticated quest fans. Take your ticket to the Moon in this breath-catching adventure which is going to drag you through such unpredictable places as damp prehistoric forests and sultry deserts of ancient Egypt! Learn the secrets of way the Great Pyramids were built and the first wheel invented. By no means you are going to turn the sounds off if you usually do, for the music reflects and maintains the mood of each scene. The included mini-games deserve special merit for being truly original and amusing. To cut the long story short, the game is sure to glue you to the screen till its outro and continue calling you for the unknown even in your dreams. Start for the inconceivable journey and face its dangers to find yourself on the Green Moon!