Heroes of Hellas 2 вЂ“ is an addicting mix of match three and hidden object games. But the predominant part is match three. In here, you are to travel to the distant in time Olimpia and help Zeus in re-buiding it.

Once upon a time, when gods rule the Earth from Olympia, a trouble came. The matter is that the gates of Tartarus opened and a giant with hundreds of hands came out of that world. He settled among people and became to spread mess and chaos. He wanted to capture and influence upon them. But until Zeus leads Olympia, the hope is alive. Under his patronage, you can drive an evil giant in Tartarus.

There are three modes in the game. They are easy, normal and hard. Each of them has three so called under-modes: hero, expert and master. You can choose any one you like. 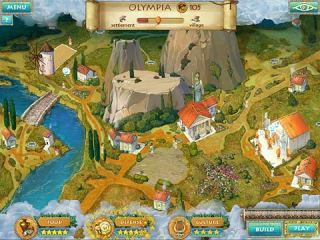 The goal of the game is to raise Olympia and lead it towards prosperity and success. You are to watch its development as well as the growth of population there. People should always be satisfied in the aspect of food, culture and military protection. In the lower menu of the main screen there are indicators of these factors. They consist of five stars. If there will be less stars, it means that you should raise some additional buildings in order to satisfy the needs of citizens. You can erect different buildings, among which are stadium, mill, academy, port, walls and so on. Every time, you want to watch the town in action, you can press an eye button. You even can get acquainted with every citizen. For this, you should choose one and press on him. Also you can visit the local museum. It contains the awards you get in the process of playing the game. For example, there is an award for passing 15 levels in succession without Zeus help or for collection of 25 treasure chests and so on.

After a determined period of time, citizens celebrate the holiday of their town. On this occasion, they will give you opportunity to choose a part of building which they will erect in order to thank you for all your deeds and worries. Thereby, you will get a castle at the end of the game. 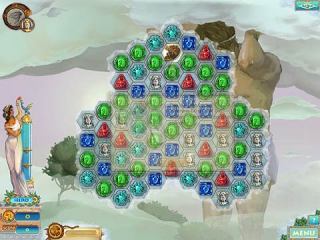 In order to build town, you need money. In order to earn it, you should fulfill some matching actions. Just remember that the more same tiles you match, the more money you will get. Besides, there is a piece of advice after each level. Follow it and you will progress in the game and earn even more score and bonuses.

At some particular levels, you should collect the pieces of a medallion. When it is complete, a new hero appears so that to help you. Every hero immediately offers you a puzzle, such as to find the pieces of objects and then put them on their places. After that you are presented a wallpaper.

Of course, the game is so exciting that you can play it and even forget about time. But don't forget about the amount of population. As the amount of people depends upon the new status of the town. For example, at first it was just settlement, then town and so on. Thus, develop Olympia and maybe you will be able to become the second Zeus!