From the creators of Lost Lands: Dark Overlord comes a new thrill that's sure to be the first of many follow up games: Lost Lands: The Four Horsemen Collector's Edition.

The Lost Lands have gone through a period of several hundreds of years in peace, but now a new threat arises that could change history...

Rumor has it that four evil horsemen are treading around and burning villages and causing general chaos.

It's up to you to get to the bottom of all this and restore the peace, but you'd better hurry!

The game starts with a scene of a Tolkeinesque wizard chanting some crazy language in an incantation (with English subtitles) then takes you to a spooky scene from a modern day setting: a woman in a parking garage on a cell phone with her son as he gets captured. 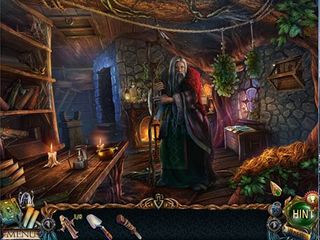 Way creepy! Then the game begins back in the Lost Lands by a neat little cabin.

This is the sequel that's going to kickstart several follow up episodes in what is likely to be the best series in a while. It's a great time to get in on the series!

If you haven't played the first one yet, I'd recommend going back and giving it a go first, then going on the second, and in the future the third, fourth, fifth... and play the whole series! It's going to be one heck of a ride!

The Collector's Edition includes the standard Strategy Guide to help you along in your game play experience and downloadable media, wallpapers, art, music, etc.

But, there's also an awesome bonus game that allows you to play a level from a whole new angle. I really hope there will be more games like this in the future!

Replay the minigames and collect the collectables in this game by getting the collector's edition. It's worth it.