The Magician's Handbook II: Blacklore - Adventures in the Magical World Go On!

The wish of the hundreds came true! The continuation of a Wizard's adventures can gladden the hearts of the game's fans! As the second part of your beloved game The Magician's Handbook II: Blacklore was released!

As in its previous version, you will face the different tasks and have to fulfill a rescue mission. But in this case your goal will not be a Cursed Valley, but fairies. As far as you can remember, in the first part of the game our hero was aided by the help of a Wize Wizard. This wizard used the Magician's Handbook for communicating with the rest. Our hero was lucky to become the wizard's student and got to learn how to read the magical writings which appear on the book's pages and how to find the magical rune stones. As the hero did not have the born supernatural powers, he even learned how to prepare magical spells from the ordinary things. 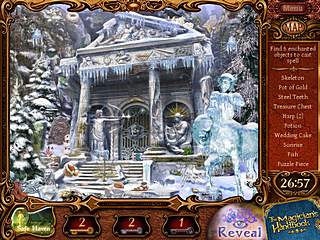 And thus he casted spells and managed to reveal curse from his land. Ceratinly he was proud of himself and his deeds. He was thinking about the magician's career, when the writings started to disappear from his holly book. Maybe he hesitated as for his forces or maybe he just had second thoughts... But he did nothing in order to prevent vanishing of the magical writings. Time passed... Our hero lived an ordinary life, but one day the book could no longer remain silent and decided to make a first step. A fairy appeared from its pages and pushed him on some actions. She told him that an evil magician pirate Blacklore captured Wize Wizard and trapped all the fairies. Only Corrigan, this fairy helper, managed to escape. A hero is needed to fight down Blacklore. The last person to stop him is our hero. But he lacks courage and the fairy land needs one more hero to help him. It should be you. Compass our hero to the victory! 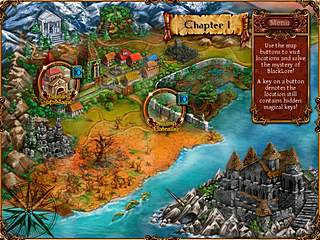 In general, the game is of hidden objects style. As was said above, our hero doesn't possess natural powers and needs to find some enchanted objects in order to cast spells. But in order that you will not be bored of eternal seeking the items, the developers diluted the levels with a lot of mini games. These small games include solving puzzles. According to one of them, you will need to restore the walls to their original state and relinquishe the magic holding the gates closed. But in order to do this task, you will need to solve one more puzzle (such as assembling magic objects to match their position in the page from the Magician's Handbook). Then cast a spell and get the power of wind or fire and use them for opening the gates.

Like in every game, there are two modes. But unlike every game, they are casual and apprentice. Casual means objects finding and puzzle solving fun without the stress of a timer. Apprentice means all the fun, but with the added challenge of a timer. Inside of each modes, there are two regimes: short and sweet or long and complete. If you like to read a lot about the plot, you should choose a second one.

One thing I liked and which differs the game from others is that you can choose a cursor. At first you are given a wand, but then you can change it to another.

In whole, the game is worth playing and spending your precious time. It is very addicting and captivating. From the first seconds you will be trapped in its fascinating plot, graphics and tasks.