Mystery Case Files: 13th Skull is the game you won't regret of spending your time to play it!

When it goes about the 7th game of the series it is already clear that the game is waited eagerly for. And sometimes it happens so that the waiting becomes even sweeter than the playing. As it is really hard to exceed all expectations and surpass all the previous 6 games. But whatever has helped – the magical number 7 or the devilish number 13 in the name of the game – Mystery Case Files: 13th Skull hasn't disappointed.

The story starts when the Lawson family inherits the house in the swamps of Louisiana. But right after they move to a new place, Marcus Lawson disappears. Magnolia, Sara's daughter, considers it's the work of a vengeful pirate, who wants to protect his lost fortune. Being afraid of his curse, none in the city can help women find out what has really happened to Marcus. So, you are their only hope! 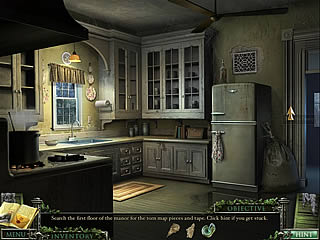 During the game you will meet a lot of characters (about a dozen in general) and to progress through a big variety of hidden object scenes and puzzles. Mystery Case Files: 13th Skull is a challenging game. To tell the truth if the hint system wasn't so quickly rechargeable it could happen so that personally I would refuse to go till the end as I got stuck rather often. And what is even more precious about help system it gives you an option! When you're solving a puzzle you can get either a series of hints to help you figure it out, or can flat out skip if you give up. As for the strategy guide it is multi-layered: you can get the overall list of objectives, or you can expand one particular goal and view the specific step-by-step.

The graphics are really great and realistic and the soundtrack is of a high class. But all these is nothing compared to the special feature of the game – is the extensive use of full-motion video. Though this technique isn't brand new – that was already used in last year's Mystery Case Files: Dire Grove – it adds an inimitable flavor to the game. The thing that impresses the most concerning the technique is that the live actors are perfectly blended with the drawn backgrounds. The great job was done and it looks even more successful then a year before. 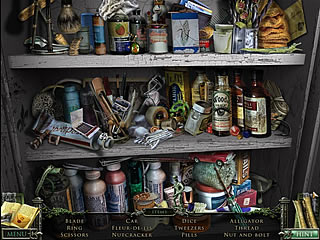 Though the name of the game implies some creepy moments, feel free to play it with kids. You will not meet nothing scarier than some snakes, graveyards and, of course, skulls. There is no blood or violence scenes.

The game is more about the adventures. So the gameplot is slightly more valuable than the typical game play. Actually the actor play adds a lot to the gameplot, but acting and dialog can be a bit stiff.  On the other hand that is not a movie, so don't be so critical about that. Sometimes the expectations are a little bit exaggerated. Don't be too critical as you can be comparing seven games of the series. The last one is a nice eerie hidden object game. And if you've been tired of the series, don't blame the last of a kind! Mystery Case Files: 13th Skull deserves applauds for both for the plot and the high level of production.