Merscom and National Geographic Games together with Gamehouse have teamed up to develop Lost City of Z, a hidden object game based on the true-life legend of a lost city rumored to exist in the jungles of Brazil.

Solve an archeological mystery of the deep Brazilian rainforests!

What is known about the story plot is that in 1925, in the heart of the Brazilian rainforest, Colonel Fawcett set out to find the Lost City of Z. He has never been heard from again since that moment. Nowadays a National Geographic researcher has gone missing in the same region. And her sister flies in to try and find her where you obligingly join her and the story begins... 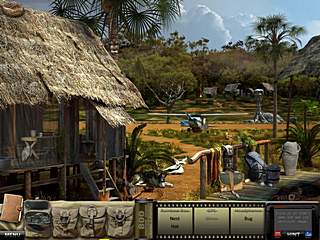 Explore the rainforest to find the way your missing sister Abigail was following. Look through abandoned campings scenes which clearly hint that the researcher was somewhere here not so long ago. Simply collect items listed at the bottom of the screen and be aware that some glittering locations can bee zoomed in allowing you to search deeper. Each item can be showed on the hint screen after clicking on it in the list. As objects are sometimes really impossible to spot, reachargeable hints are perfectly to the point. The hint system only shows the area where you should look closer but doesn't highlight the searched item directly. Be careful as grabbing things randomly is not going to help you. This warning pop-up window is sometimes so annoying, so click reasonably to avoid it. 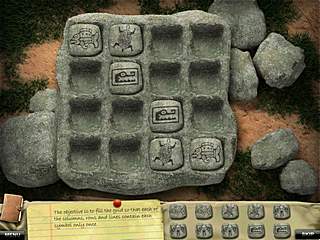 Wild animals on your list have to be not only found but also taken a picture of. The rescuer of the sister believes her sister to find them necessary for her collection. You can set them as wallpapers on your display, by the way! Well, I have already set a picture of scarlet macaws which is a complete pleasure to the eye. Just take your camera when you've seen the highlighted animal and aim to catch it in the center. As you advance, you can check your diary for more information on the wildlife you spot, and the story.

One more pleasure I discovered in this game is the background sounds of wild nature which make the atmosphere really immersive. Ah! Nearly forgot to tell you to keep some found things as you never know when they may be useful... The more clues you find the more you realise that Abigail was on the traces of the Colonel Fawcett and the lost civilizations he was looking for.

On the whole, Lost City of Z: Special Edition is a real pleasure to play, though some graphics could be clearer drawn and not so dark. Considering the other strengths it's not a problem though.

It's exactly what fans of adventures and challenges need!