The White Lady legends are found around the world. According to some of them everything is about a woman that lost her beloved or was betrayed by a husband or fiancé, due to the others she is supposed to have died or suffered trauma in life. In any case the woman in white is cloaked in mystery. She knows about countless riches and mostly is of ill omen. The legend goes back to the Victorian times, that is why there is no surprise that a new hidden object game Victorian Mysteries: Woman in White offers you to explore the Victorian mansions to reveal the secrets of an enigmatic Lady.

The game plot is based on the detective story by Wilkie Collins. The game is a continuation of the series, started with Mystery Masterpiece: The Moonstone. As in the novel the story is about penniless drawing teacher, Walter Hartright, who was employed by Fairlie family. He is your conductor through all the darkness and the mystery of England in 19th century that is perfectly depicted in the game. 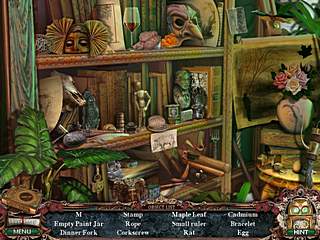 The graphics are marvelous. Though it is a little bit too gloomy, it is clear and allows you to feel the atmosphere of the situation “there might be a ghost around the corner” in full. The music completes. If you play late in the evening being alone in a big house, be sure to quiver all night long then. Because the game is pretty good at creating the proper mood.

Back on topic of the plot, while teaching Walter little by little gets the feel of an old mansion. The job goes well and the future seems finally sunny as suddenly you run into a woman dressed in white who seems to know a lot about the Fairlies. Being confounded about the woman you start your own investigation in the center of which one of your students Laura Fairlie is found.

The gameplay in Woman in White is typical for a hidden object adventure game. And that is not at all bad. You're provided with a variety of locations, zoom-options to interact with the objects and many other things that the adventure-fan is already used to. Besides your character has a journal which contains all the clues that you as a player have compiled so far, as well as biographies and a family tree of all the characters your hero meets on his way. 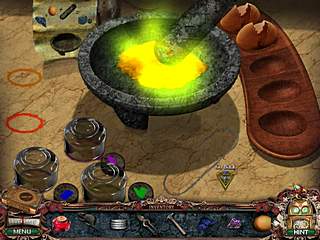 There are two modes in the game so that everyone can choose the level of complicacy. Depending on the mode you choose at the start of the game, the "objects of interest" in each scene will either be highlighted to make it easier for you, or unmarked so that you have to figure out which items might be important to your investigations. But this is not the only thing about the hint-system. If you pause for too long when you encounter a new puzzle, the you'll get some hints on what you are supposed to do. And if you are still stuck after that, you're welcome to use "skip" button. As for the puzzles they are really worthwhile but not some simple memory matching games. As for example you'll need to match newspaper articles... and these articles also happen to be liners for a bird cage!

If you ever thought of yourself as a plausible Sherlock Holmes, Victorian Mysteries: Woman in White is a proper chance to prove that!