There are plenty of hidden object games on the market, but it's not easy to find a truly unique gem amongst them. What makes the difference is the right mix of ingredients: inspiring story, captivating adventures, mysterious characters, and, of course, cunningly constructed hidden object scenes. Welcome to Nightfall Mysteries: Asylum Conspiracy! This game won't leave all the fans of mystery and puzzles indifferent...

The storyline of Nightfall Mysteries: Asylum Conspiracy is as twisted as an old grape vine: you will feel the tension right till the end of the game. The premise seems simple, though: a young girl named Christine got a letter from her grandfather, and now she (and you, of course) has to go the forgotten island, where something wrong and wicked had happened long time ago. Will she be able to uncover the terrible secrets of this land? As usual, it's up to you to decide. 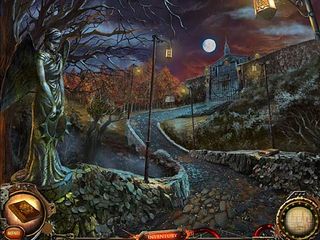 There is a lot of locations in Nightfall Mysteries: Asylum Conspiracy. Still you should get used to returning to some of them, to complete your tasks. The game tries to be nice to player, though: by using handy map, you can travel between locations literally with the blink of an eye!

All the progress you made is kept safe within a helpful notebook. The audiotapes are scattered throughout the locations, revealing the secrets of Asylum's past; they are voiced pretty well.

Also there is a lot of interesting logic mini-games: my favorite one was to choose three symbols, by using the cursor keys, related to the central icon. 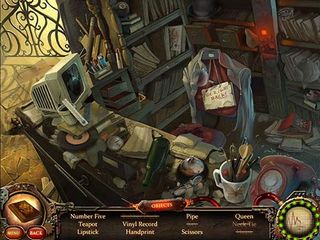 It won't be fair to describe Nightfall Mysteries: Asylum Conspiracy, using just one genre cliche: it's actually a mix of adventure, quest and hidden object games. The latter part is quite nice: hidden objects are very distinct, and not hard to find at all! But if you have difficulties, there is always a hint to follow; they recharge very fast.

The whole game is pretty normal, but not without its own share of scary moments - for example, randomly appearing people or toys in the Asylum toyroom really made me jump out of my skin a few times - so you won't feel bored.

The music perfectly fits the mood of the game, and the graphics are just excellent.

So what's the point? As I said before, Nightfall Mysteries: Asylum Conspiracy is a really one-of-a-kind game, just what all the lovers of hidden object games have been looking for. And if you played Nightfall Mysteries: Curse of the Opera (as I did!), to get this one is no-brainer.