Play an addicting game Nightfall Mysteries: Curse of the Opera!

Download Nightfall Mysteries: Curse of the Opera for Windows.

Nightfall Mysteries: Curse of the Opera will find its adherents among the puzzle lovers. As this game is a mix of a hidden object genre and quest.

As a usual, at the beginning of the game one can come to learn the gameplot. But in this game, there is no introduction. You find out the story by playing the game step by step. All you know after launching the first chapter is that the main hero was driving to a village and his car was broken somewhere at the abonded place. And now he urgently needs to get to the village Opera House. Because there will be a performance, in which he seems to be acting. But after you solve a series of tasks and get to the village, you understand that something strange is happening there... Though you don't know yet what exactly... 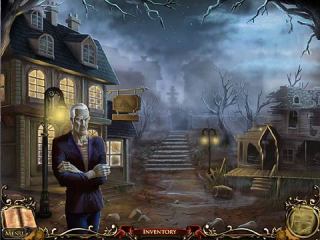 Nightfall Mysteries: Curse of the Opera reminds a game called Campfire Legends. There are a lot of similar features: sudden appearance of some items or people, scaring sounds and dreadful scenes. Though as for me the second one is better, but Nightfall Mysteries is also good. The most exciting is the quest parts. As you need to go to the distant locations, complete a task, for which you will get a special item and use it somewhere else. But it is a little bit boring that you have to return to the same locations for several times.

As a rule, the quest games have not so many hidden object parts. But this one has approximately the same amount of HOG scenes. In each scene, you are to find the items from the list and then one more additional item that you can use later. 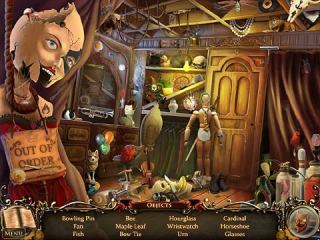 Sometimes, you are to solve a riddle or something like that in order to find it. For example, there is one: "King of a jungle holds a key". Thus, you need to find a lion and take a key from him. Then you can use it. Besides, there are also mini games. There are not so many of them. The tasks are as follows: to turn on all the lights by connecting them with the help of a string, find missing plugs and so on.

There are hints a the game. But only in HOG scenes. Be attentive and don'y click too much! As a random clicking will cost you a hint. If you no not what to do, you can look at a Notebook. It keeps contain information about the taks and locations.

The game has both advantages and disadvantages. Any way, it is good and thrilling.

Download Nightfall Mysteries: Curse of the Opera for Windows.