The name of the newly released game by Codeminion might scare away the players who are already sick and tired of the cursed houses and dilapidated buildings. Phantasmat starts with a car crash and as soon as you get to know that your heroine has stayed alive, you're advised to look for the help in an old hotel but under no circumstances stay there. By the way hardly anyone would stay in the the hotel called "Drowned Dead Hotel" in a real life. But has anyone ever followed such advices while playing? I bet that only those of you did so, who shut down the casual games after having played them for several minutes.

Phantasmat is certainly dark and creepy, but it is absolutely gorgeous. The voice acting is really good, too-especially that of the hotel owner. Besides listening to the dialogues makes sense. It not only adds to the over-all interest but also prompts you what to do next. Turning back to the artwork, note the little details. Personally I enjoyed even the loading screen, as the eyes of the characters are closed and then suddenly opened when the game has loaded – and that is really awesome. Even the HOG scenes contain some little animation. 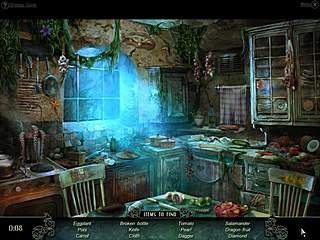 Phantasmat has a nice balance of both hidden object and interactive scenes. As for the objects that you have to find they are well integrated in the scenes and not completely random as it usually happens to the majority of the games. And what is more you have the option at each HOG to either search for the object, or to play a Match-3 game! You can even go back and forth between the two within the scene as many times as you like.

The game play is so smooth (scenes are crystal-clear, beautifully rendered and carefully created) and the storyline is so intriguing that some of you might be irritated by the repeated “visions”. Guys, the flashbacks must be watched the first time only, and then they can be skipped by double clicking later. If you're not patient enough to follow the dialogues as well, just click them through to make it faster or even skip them altogether by clicking the skip dialogue button. There is then a short synopsis of the conversation, so don't be afraid to miss anything important. 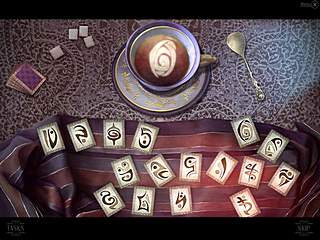 The puzzles in the game are not frustrating, the only one brain-buster to me was the piano song I had to play but after several tries, I finally figured it out.

If you disregard pressing the hint button every time you get stuck be sure to get rewards for the achievements. But the thirst for the best result might be not the only reason to replay the game. The 3 different competition levels add value and re-playability. The hardest of the three has no hints, no skips and searches are timed...

The Collector's Edition traditionally proposes you the bonus material. But even here some surprises are waiting for you. In addition to all the usual graphics and music you get the detailed character bios so that you can learn more about their backgrounds than what is revealed in the story.

Phantasmat is one of the best games that has been released recently. But be careful, it can raise the qualification standard of the HOG so high that every next game might seem you so-so afterwards.