Play Pocahontas: Princess of the Powhatan

Pocahontas: Princess of the Powhatan is one of the latest releases in the hidden object genre developed and published by Twintale Entertainment.

Let's see what kind of a game we have here in the times when tons of hide-and-seek games are being released every once in a while.

The game gets you to be an observer of a well-known story of Pocahontas.

We all know or at least have heard the story of Pocahontas. In this game we'll recap it and even participate in it by playing in all of the locations.

Following the story you are going to join Pocahontas in her journy from her motherland to London as well as witness her lovestory with Captain John Smith.

All this travelling will get you into all kinds of locations where you are to play hidden object levels. 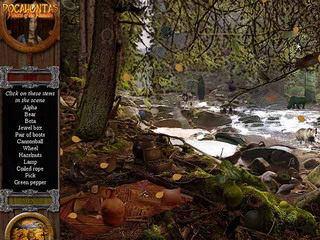 Those are rather difficult by the way. The hidden items are not that easy to distinguish. For this reason have you got a hint system. The hints are not limited, but they are not that specific in locating the items too.

The items are hard to find sometimes just because of bad graphics quality. The pictures are too blurry at times to find anything.

But at the same time the scenes may be very beautiful in some locations. 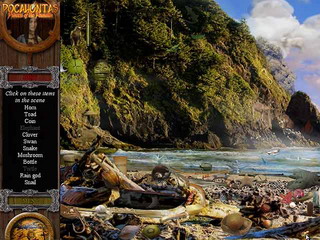 There are also mini-games that you play every once in a while. Those don't offer much more fun or something extraordinary.

So as you can the game does have its pros and cons.

In this case the trial version is a good thing. You can always make your own judgement and decision.