Play an addicting game Secrets of the Dragon Wheel!

Secrets of the Dragon Wheel is a standard hidden object game, playing which you will feel yourself at home. It is packed with intrigue, crime and mystery.

Epiphany O'Day is a young scientist, who dedicated her researches to the Dragon Wheel of Shaanxi, mysterious ancient artifact that has a great power and energy. When she presented her findings on that artifact to the academic board, they called it "outrageous little girl's fantasy" and terminated the research. She felt desperately and decided to go to her Professor who lives in Istanbul. But what happens to her when she gets into train?! She becomes a witness of murder, mystery and strange escape. And at that particular moment she understands that the Dragon Wheel artifact is really not a fiction and someone just doesn't want her to unlock its secret. 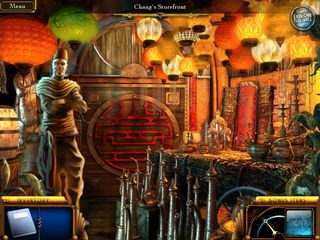 There is nothing new as for the tasks. They are very easy and thus you will need little time for solving them. In the HOG scenes as alwas you will need to look for the hidden all over a location items and collect them. Every scene has some special items which you may use somewhat further in adventure parts. Sometimes you may collect the definite amount of the similar objects such as masks.

Between the HOG scenes, you will play adventure parts. As the game is fixed upon unlocking the secrets of the Dragon Wheel, there are a lot of mysteries and murder. At the same time you will have to make investigation and solve crime cases.

There are also minigames. But frankly speaking, I even don't know whether they are worth of speaking about. They are good, but they take too little time to be solved. 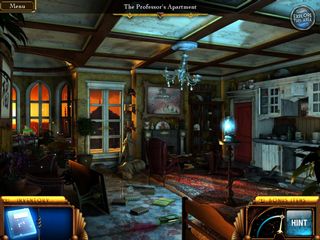 It made me few seconds to solve a minigame.

As for the whole atmosphere in the game, I'd like to tell that it is a bit dreadful as for me. In the most cases, scenes are presented in dark colours, sometimes full of blood and dead people. But at the same time the graphics from other scenes are very bright and good-looking.

To summarize, the game is not bad, especially if you like hidden object genre. But it just has nothing remarkable comparing to other games.