Strange Cases: The Lighthouse Mystery is a new hidden object game with everything it takes or a good HOG. The story if full of everything unclear and mysterious. Be read to deal with searches, missing scientist, dead FBI agent, trail of clues, unexpected end.

FBI agent Claire Ellery had a bad dream, the one you wouldn't want to remember in the morning. A mysterious woman with a glowing blue pendant. A dead FBI agent and a missing scientist. But sometimes the nightmares come true. The next day Claire finds out that her former partner Tom, is dead. Now she is to follow the clues and find out what happened. 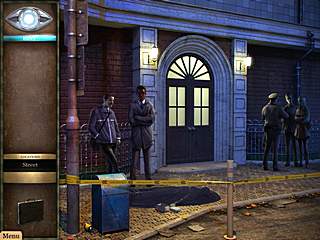 Tom had written lists of clues on the backs of illustrated cards and stashing them throughout locations ranging from his apartment and his office to an abandoned shack, an underground laboratory, a fallout shelter and more. That sets the scene for the hidden object levels where you first find the cards and then the items listed.

There are three different types of cards, each with a different style of clue: Blue cards have a straightforward list written on them, green cards display silhouettes of objects and red cards show items that have been broken into small pieces which must be found and reassembled. Each level in the game can contain as many as three hidden cards, one for each type. Now you have an idea of how much of the game is made up of searching. 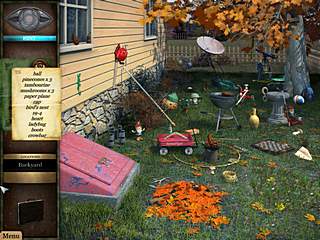 Most levels include at least one "interactive item" which must be used elsewhere to move the game forward. Levels aren't timed but too much random clicking will earn a "cursor penalty" that sends the pointer spinning out of control for a few seconds. Several puzzle are mixed into the game, and they are quite entertaining.

You can find yourself wandering around every once in a while trying to figure out what to do next, but doesn't overshadow the good parts.