Play a puzzle game The Conjurer!

"Hello, old friend! I can't tell you much more at the moment, but I think my life is in danger. I would feel a lot safer if you came to my dinner party at Saturday. I have already sent you an invitation" вЂ“ this is the letter which opens the hidden object game The Conjurer, the game full of intrigue, betrayal and magic.

The matter is that there is a great Conjurer, who is famous all over the world. But the tragedy happened to him: because of some reasons he retires from a stage and settles down in the old castle. His admirers don't know why he acts so. But the reason is that there is someone who tries to kill him. Thus, the Conjurer does wisely: he cordioulsy invites 10 magicians to his retirement party. Every visitor will perform a magic trick in Conjurer's honor. Then he will choose the best and give him an access to the greatest mysteries. But this is the thing every invited magician thinks over. In reality, there is noone worthy of the Conjurer's tricks. And all that he wants is to use the time of tricks performance and find out the betrayal among the visitors. 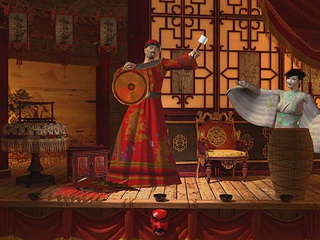 The game belongs to hidden object genre. Thus, you will spend the majority of time looking for different objects. There 10 quests and you will have to explore 6 rooms of every quest. There also will be 2 additional tasks. For example, let's take a look at a trick of Chung Lung Foo. First of all, you will investigate 6 rooms and find the things neccessary for fulfillimg a trick. After this you will have to clean the stage and put the inventory in order. After all you will watch a trick. As a rule, at the end of it omething strage happens such as unexpected disappearence a magician and so on. Thus, you will also have to solve a puzzle. In this case, collect a dragon from pieces and thus get a key to the secret entrance. One more kind of a puzzle is solving riddles. Then there will be another magician performance, for example Whitebeard's and you will have to investigate another locations. 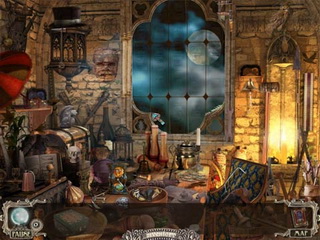 There is three kinds of hints in the game. First is when you click on object's name to reveal its silhouette in the crystal ball. Second is to click on the crystal ball to display an object. This hint is unlimited. And finally third is a superhint, which shows where exactly an object is. The last hint is only one per a magician. But to tell the truth, when I played the game there were flying lights which represented a kind of a hint also. And following its directory i could find an object. To say that before the lights appeared I did nothing and did not ask for a hint.

The music is written in a magic style. It creates an atmosphere that you are in a mystic place. In general, the game is not bad. But as for me it would be better if there were some more puzzles to solve. Because it's a little bit boring only to look for hidden items without switching on another tasks.