Back to the ocean, with stories based on familiar characters from Greek mythology, Odyssey plays like Tradewinds "lite" compared to 2008's Tradewinds Caravans.

A few players who like to get elbowdeep in complex strategy will be disappointed, but those who preferred the simpler gameplay of Tradewinds 2 will find this fun and engaging.

And with six different stories involving pirates, princes, and mythical beasts, you can easily take more than a week before you even get out of story mode!

In each story you have one long Main Quest, whether it's finding a missing heir, retaking a lost Kingdom, or even finding a cure for mysteriously ill family members.

As you complete the main quest, you explore cities, sell tradegoods to earn money, and occasionally fend off pirates or other bad guys. You can also accept optional quests for even more adventures. 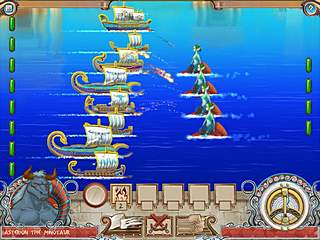 You still get to buy ships, weapons, and magical items and decide what tradegoods to buy and sell. But now you can see the entire worldmap on one screen, and the number of tradegoods is down to about six, making merchant decisions much easier.

Armies in Odyssey are just a few different kinds of ships, and weapons are limited to a choice between standard and premium short and long range, also simplifying military strategy.

Finally, the problem of fighting unexpected battles and ending up too far from medical services has been eliminated, since you can buy reasonably-priced magical items to heal your navy mid-battle.

On the plus side, one unlockable character has a customizable look. Since that's the sixth story you'll play, it was a fun time to add in personalization. 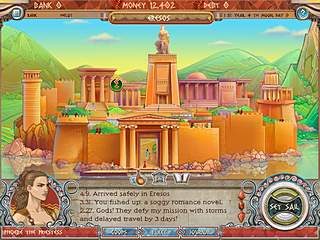 Finally, Easy Mode is very well-designed. Players who want a full adventure experience should leave Easy Mode off and explore on their own, but if you'd prefer to play through the main quest directly, Easy Mode will mark the next city/building you should visit with a large orange "?".

So the good news is if you preferred the gameplay of earlier Tradewinds titles to last year's Caravans, you'll probably really like Tradewinds Odyssey.