When she woke up, she found herself locked. But where? She picked up a lighter and appeared to be at the back of a truck. Sure she was frightened to death. But her only desire at that time was to escape it.

After some time and efforts, she managed to escape. Suddenly, she heard a voice. It was a kidnapper's. She understood that it will not be so easy to escape all the traps made by him. But she will try. Even if it will cost her a whole life. Even if there is no more ways out. Even if she doesn't remember who she is and how all this has happened. Even if that kidnapper is a seril killer. She will try... 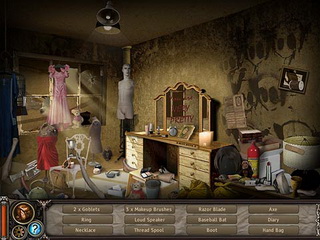 This is the way the game Trapped The Abduction begins. The plot is rather scoopy and thus the whole atmosphere of the game is scary. Moreover, in whole it is very dark and dreary and the graphics is represented in gloomy colours. Even the items to find differ from that which are in other HOGs. Among them are such objects as instruments (saw blades, balts) and parts of body (bones, skulls).

The tasks are not boring. Imagine that you were locked somewhere in an unknown place. It is like a garage with a lot of neglected cars. You look for the entrance and find out that first of all you need to get into one of the cars. It's also locked. So you look for a crowbar and break its front glass. Then a window with a kind of puzzle appeares: there is glass with pieces of broken glass at its sides. In real life, you will not get through it without being injured. Thus there you will also have to bust out the rest of the glass. When it is done, the puzzle is complete. 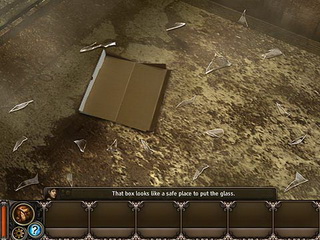 In general, the game is a bit spooky. If you like to be scared, it's just what you need. But it is necessary to say that it lies heavily on your state of mind. You feel like being there by yourself and thus want to get out of the traps and finish the game as soon as possible. It makes you a little bit depressed of that kind of gameplot and graphichs. By the way, music is also not so happy as it could be. Especially the sounds. When you make something wrong, a scary voice cries out.

As you can see, the game is rather contradictionary. That's why you should at first play it and then decide whether or not you like such kind of games.