Play an addicting game The Treasures of Montezuma 2!

The goal of the game is to collect crystals by getting them out of the tokens. The amount of crystals rises with every new level. For example, there are only 10 of them in the first level and over 60 in the last. Thus, you will need more and more time to collect them all. But at the same time don't forget about the total time: make matches as fast as you can and you will get more money at the end of the level. 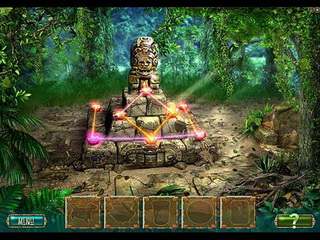 There are three modes in the game: adventure, endless and puzzle. But you can't choose between them. You should only pass the previous one in order to unlock the next. After each level you can get a mask. The mask tells about how successfuly you have completed a level. If you get a green mask, it means that you passed a level before the clock has changed its color and thus you earn the most gold. If you get a yellow mask, than the clock changed its color and you earn less gold. But if you get a blue one, that means that you completed a level after the clock changed its color twice and thus you get the least gold. That's why try to succeed as quickly as you can. Inside a level, there are three so called under-modes: normal, expert and hard.

After a level is completed and you have earned some money, you can visit a town. It is a place where you can buy upgrades, bonuses and tokens such as bonus time, color blast, treasures, red totem and others. 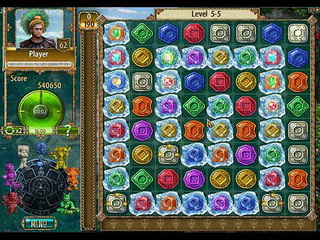 They will for sure help you in completing the levels. For example, a red totem will remove all the red tokens after you will make two successive mathes of red tokens. If you do your best, you will get an award. There are a lot of them and they are very various. Among them are super combo (when you match 10 tokens), all collector (when you pass 20 levels with a green mask), game fan (when you play the game during 5 hours). The most valued is perfectionist. In order to get it, you shoud pass every level in Adventure mode with a green mask.

The graphics is much more better than of its predecessor. It is bright and cheerful. But as for music... it stays the same. And it is one of the minuses. As you have already heard it, but still want for something new.