Enjoy delightful mix of match-three and hidden object games in Trial of the Gods: Ariadne's Journey!

Download Trial of the Gods: Ariadne's Journey for Windows

In the latest time, there are more hidden object games then match three on our site. And I suppose that the fans of match 3 will be glad to play the new release of this genre, that is Trial of the Gods: Ariadne's Journey. Especially because the first part of the game was cordially accepted by the players.

What is going on in this part of the game? After Ariadne and her beloved have overcome an evil Minotaur, Greece was invaded by the cruel Amazons. Theseus had to fight with them alone. In spite of being strong, the forces were unequal and thus he was captured. After Ariadne found that her beloved is in danger, she started her journey to find him and rescue. 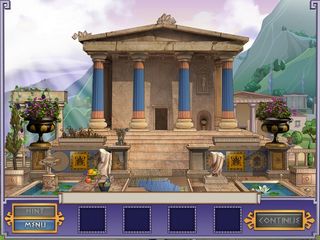 Sure that such a tender girl isn't able to cope with this uneasy task and defeat the army of Amazons. Thus she turns to Gods for help. They agreed, but only if she restore their temple. Restoring the temple is not a hard work. All you need is to make matches and collect the building material. At the end of each level, you get an item for restoring a temple. At first these items can be immediately used. But further, they happen to be incomplete and thus you should pass one more level in order to get another part of the whole item.

In order to understand the working mechanism of a match 3 part, we need to explain how the game works. There is no exact division between the chapters of the games. In order that Ariadne could get to her beloved, she needs to reach a lot of other people who will help her and give a gift for Gods. You can move to them by completing several levels of match 3 parts and one hidden object scene. Then you come to a definite person and the chapter is completed. The goal of a match 3 part depends of a person whom you go to. If it is a merchant, then you'll have to collect all the purses; if it's a fortune teller, then cards and so on. 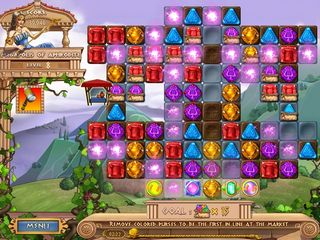 When you do match 3 work good, you will be rewarded with the magic artifacts. They have a special meaning and can help you further. For example, a hammer of Hephaestus removes tiles in any vertical column you choose; Cadues's staff schuffles the tiles surrounding the selected one and so on.

As for hidden object part, I'd like to tell that they are different from those in other games. Mainly because the scenes are not overfilled with items, that is now unusual for HOGs. Moreover there are not so many objects to look for, approximately 10 or something.

The game is just overfilled with features. There are also a page with your achievements, different modes and what's the best – wallpapers! In order to unlock them, you need to complete adventure mode and start playing Ariadne's Loom mode. But don't be afraid! It will only be pleasure for you!

Download Trial of the Gods: Ariadne's Journey for Windows