It seems that nowadays one can hardly find a person who did not play or just hear the name of the most successful and best selled game Zuma! The continuation of the match three sequel is embodied into Zuma's Revenge.

The main hero of the game is a well-known to everybody frog. This time she was shipwrecked and somehow occured on an island. The island is a place of playing. It consists of 6 zones. At first all of them except one are locked, but continually you will reach and unlock even the last one. Every zone consists of 10 locations, which differ from each other. The innovation which distinguishes Zuma's Revenge from other Zumas is that after every tenth level, there is a boss fight. Boss is often an idol or an ancient god. But every new boss becomes more and more powerful and thus gradually it becomes more and more difficult to overcome him. 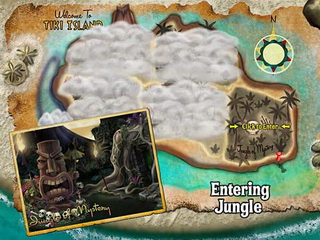 After you pass 5 levels, the hot point activates. This means that in case you will loose all your lives, you can restart the game only from 5 level of a specific zone. For example, if your lives were lost at 9th level, you will restart only from the 5th.

Astonishing is graphics. You will really be amazed by the cute and bright pictures. When I played I even did not understand what I like more: the involving game or colourful pictures.

The sounds can also gladden your ear. They remind the sounds of badminton. It seems that you are not matching the same balls, but playing badminton. The only thing is that once you can be tired and they can become a little bit annoying. Any way, you can always switch them off in the game options. 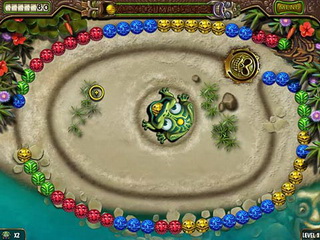 One of the game features is that the developers have prepared a hint to every level. And when you start it, a message appeares telling you about new power ups or improvements. According to one of them, in order to fill Zuma's bar faster you should shoot fruit; slowdown power up reduces the speed of balls in curve; lightning destroys all balls of your target's color.

Moreover, the game gives you a possibility to play differebt modes, such as Adventure, Challenge and Heroic Frog.

You know, every game has both positive and negative sides. But Zuma's revenge has more pluses. I think that this game has already receommended itself as a truely worthy game and you will not be upset after purchasing it. But it is still your choice whether to buy it or not.